The Strange Disappearance of a Bollywood Star: guest post by Vaseem Khan 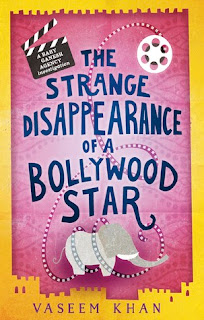 You never know what will happen when you turn the page…UK-based Mulholland Books publishes crime, suspense and thriller novels you’ll find difficult to put down. Somebody in the editorial department must have an interest in Asia, as the imprint is home to both Adi Tantimedh, who wrote a guest post earlier this week, and Vaseem Khan, who does so today.
Vaseem was born in London, spent a decade working in India, and now works at University College London’s Department of Security and Crime Science. His passions include cricket, literature, and elephants – which he first encountered on a street in Mumbai, a sight that stayed with him, and, eventually, inspired his Baby Ganesh Detective Agency series, featuring retired Inspector Ashwin Chopra, and his baby elephant sidekick, Ganesha. Together, Inspector Chopra and Ganesha investigate the dark side of Mumbai.
The unlikely pair get their third outing in Vaseem’s latest novel, The Strange Disappearance of a Bollywood Star. The plot centres around the disappearance of an Indian film star, and incorrigible playboy, Vikram Verma. His formidable mother hires Inspector Chopra and Ganesha to find him; together they embark on a journey deep into the world's most flamboyant movie industry.

So, over to Vaseem to talk about what inspired him to write The Strange Disappearance of a Bollywood Star...
In my twenties, I was fortunate enough to live for a decade in the city of Mumbai – once Bombay. This was at a time when India herself was making the transition from being a largely rural economy to the global powerhouse that we know her as today. I saw, first-hand, the effects of this change, and how it swept across cities such as Mumbai, bringing with it both good and bad. Throughout this period, when it seemed that Indian society itself was struggling to decide on how exactly to redefine itself, one constant remained – the ubiquitous appeal of Bollywood.
The movie industry permeates the very fabric of the greatest city on the subcontinent. Before I went to India I knew very little about the country – indeed, most of what I had gleaned was from Indian movies. Such movies, however, are often accused of bearing little relationship to reality. Bollywood films are often called masala movies because they are composed of many, often conflicting, elements, much like India herself. A typical Bollywood potboiler will include action, romance, comedy, melodrama, songs, and those signature dance set-pieces that are so much a part of the subcontinent’s celluloid tradition.
And yet, these same movies have documented and, at times, shaped a nation, from the earliest days of the nationalist movement, when Indian moviemakers did away with onscreen kissing as they did not wish to project the values of their colonialist masters, to modern, glitzy Bollywood spectaculars geared towards the vast Indian diaspora, shot in foreign locations, and tackling hot topics, such as the role of women in Indian society.
Yet there is another side to Bollywood, a darker side, one I only became aware of during my time living in Mumbai. Indeed, The Strange Disappearance of a Bollywood Star is really my excuse to get behind the scenes and examine Bollywood’s dark heart.
One day a famous film producer, the father of one of India’s biggest stars, was gunned down in the street just yards from where I worked. As a lifelong writer this intrigued me, and so I began to research. And that was when I learned about the longstanding relationship between Bollywood and crime.
It transpired that, due to the Indian government’s refusal to recognise Bollywood as a legitimate industry, filmmakers were denied access to regular sources of finance such as the banking system, leaving the door open for India’s notorious criminal gangs. The combination of glamour and the opportunity to launder dirty money proved irresistible, leading to the emergence of the so-called Bollywood dons. Lurid cases of producers and actors being blackmailed and threatened by infamous gangsters regularly made headlines throughout the seventies and eighties. Indeed, it wasn’t until the late nineties that the Indian government finally saw sense and legitimised the industry, so that today most Bollywood movies can aspire to greater ambition, free of the dark shadow of the criminal underworld.
My aim with the Baby Ganesh Detective Agency series is to take readers on a journey to the heart of modern India, and thus it seemed only apt that I use Bollywood as a canvas for the latest instalment. After all, for most Indians, it is virtually impossible to divorce questions of identity, nationhood, and personal aspiration from celluloid depictions of the country.
You will enjoy these books if you like crime that comes with a real sense of place. They are usually compared, favourably, to the No.1 Ladies Detective Agency novels, though I feel my books are a bit darker. Chopra is a serious man, and the crimes he tackles are serious ones. But having to deal with the surreal dilemma of a baby elephant allows me to add a little humour in between the gritty crime stories.
Details: The Strange Disappearance of a Bollywood Star is published in paperback by Mulholland Books, priced in local currencies.
Posted by Rosie Milne at 08:37