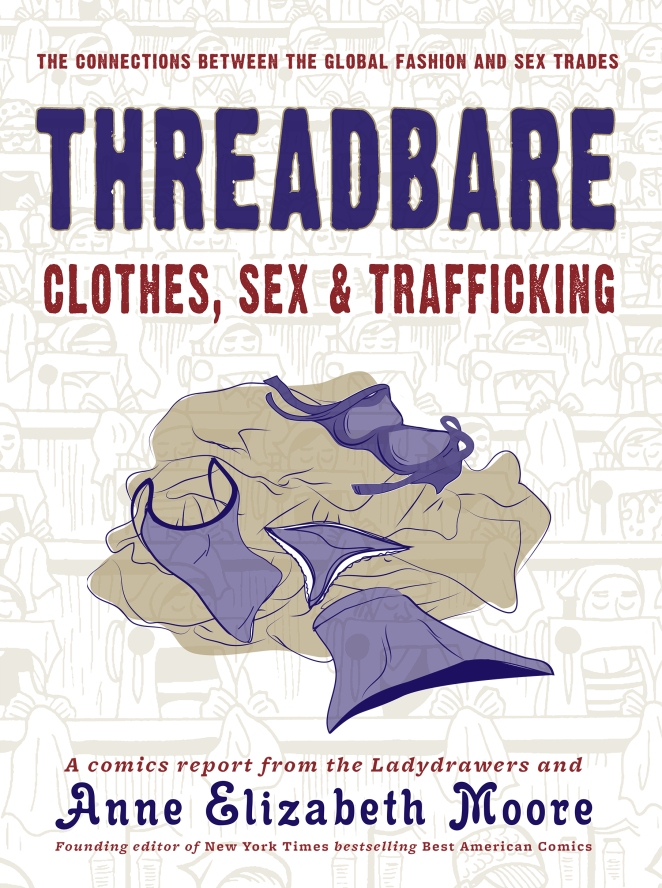 Graphic novels are wildly popular in Asia, but how about comics journalism?  This mingles the techniques of graphic novels with those of investigative journalism.  Chicago-based Anne Elizabeth Moore is one of its leading proponents.  In May, she will publish Threadbare: Clothes, Sex & Trafficking, a collection of reporting, research, and art, exploring, amongst other things, how the darker side of the global fashion industry has roots in Asia.


Anne Elizabeth Moore spent six years reporting from Cambodia, on garment factories and on the links between repressive policies in those factories, and NGO’s working against human trafficking. But Threadbare, illustrated by members of the Ladydrawers Comics Collective, visits not only the sweatshops of Cambodia, but also, for example, the traditional ateliers of Vienna. It encompasses everything from the life of a globetrotting supermodel to the warehouses of large clothing retailers, and from the second hand clothing industry to the politics of the sex trade. It pulls at the threads of gender, labour, and cultural production to paint a disconcerting picture of a human rights in a globalised world.

How do you describe the Ladydrawers? How did the group come about, and what are its aims? Are they influenced by graphic novel forms from Asia?
The Ladydrawers Comics Collective is a group I fostered in 2011, partially in response to the fact that Western comics weren't offering young women the same opportunities as various strains of manga, or Asian comics, did. The Ladydrawers is an unofficially affiliated group that researches, performs, and publishes comics and texts about how economics, race, sexuality, and gender impact the comics industry, other media, and our culture at large. We're diverse in terms of race and gender, although not so much age - I'm the oldest. Our data comes from original research conducted in the public realm by students, interns, volunteers, and supporters around the globe. Our content - including comic books, online strips, posters, postcards, games, and apparel - is created by folks with a range of experiences in the comics industry, including both professionals and newcomers. We've been based in the US for the last five years, but really we've been working closely with international folks for a long time, particularly a European feminist collective called Femicomix Finland. We don't currently have any members based in Asia, however. Not yet!

What is “comics journalism”? Is it a new genre?
Comics journalism is reporting and commentary in comics form.  It has been around for a long time, but the shelf-title designation has not been, a lack which is more an indication of how marketing works than how people make or consume media. Folks have certainly been combining text and image in a sequential narrative since writing was invented, but someone in a marketing department in the US around 2002 decided that, in order to sell comics in hardcover form, they needed to be packaged as "graphic novels". But graphic novels are a very specific kind of comic: they are a long form, fictional story, usually told by a single author or established group of authors. Threadbare: Clothes, Sex & Trafficking is not fictional - I paid for that reporting occasionally in my own blood - and so not a "graphic novel". Nonetheless, our request to use the term "comics journalism" as an official Library of Congress designation for the book was denied, probably because there just isn't the critical mass of books that can be called "comics journalism" for Library of Congress designation.

What are the advantages of comics journalism over either comics, or journalism?  What does this format bring to challenging topics that straight narrative text cannot?
In the Threadbare strip Let's Go Shopping there's this moment where I'm interviewing a character named "Ali" and we explain in the narration that employees sign non-disclosure agreements and can't usually talk to press, but since what we were doing was "just comics" - it's not seen as real journalism - that worker felt comfortable sharing information with me she wouldn't otherwise have shared, as long as I made a reasonable but not totally accurate representation of her so she couldn't be tracked, and fired or sued. So: realism without endangering folks in oppressive situations. This turned out to be a major point in the sections critical of NGOs, too. In text-based journalism, you can't always get that level of realism without endangering your subjects.

How did you decide that you were going to write about the intersection between the international sex and garments trades, and people trafficking?
I wanted to tell the whole story of the garment industry, as an economic force. And it just became clear that, as much as we might not like to admit it, the story of our clothes includes not only the oppression of workers in the factories that make them, but the oppression of women outside of the factories, too: in fact, the oppression of women who'd made deliberate choices to leave the garment factories, and were being punished for it.  It was a difficult story to tell.

Can you tell us about your time in Cambodia?
For seven years I was travelling regularly to Cambodia and residing there for extended periods, doing work around young women's media justice and reporting on the garment industry. I've travelled around Southeast Asia a bit, and Asia more generally, and the world, too, but Cambodia is an exceptional and beautiful place and I remain fascinated by it in a way I'm not by other places.

What were the challenges of researching the Asian segments of Threadbare?  Did you ever feel endangered whilst undertaking research?
I'd been covering the garment industry for years by the time Threadbare started, so I've been harassed, and threatened at gun point - all that stuff that comes with the territory of journalism in Cambodia. So I was used to that, and the doings of other people, including authority figures, rarely frighten me. But the real challenge was that I actually got sick during the reporting process, with several different chronic illnesses that have kept me from Cambodia since the early days of 2014. It was at that first big garment worker uprising in 2014, in fact, when the military police started firing on protesters, that I first realised I was sick. Over the process of putting the book together, I kept accruing diagnoses and symptoms and none of the meds were working right - and most were doing even more damage than the diseases themselves - so I actually was endangered, and at a certain point it wasn't clear that I'd be able to finish the book at all.

Is there any possibility of translations into Asian languages, so garment workers and sex workers here, if literate, can have a chance of reading it?
I hope it is translated and officially distributed. Some of my work has been translated into Mandarin, but mostly via underground translations. I don't mind that, at all, but I do think it's particularly important that a global project like Threadbare is read in the places I did on-the-ground reporting; Cambodia and Austria, in particular.

Are you still in touch with any of the women garment workers / sex workers?  Do they know about the book?  If so, what do they think about it? Do they know they feature in it?
Well, these are not communities of folks in Cambodia that are online very frequently, and some of them I'm not connected to on Facebook, and I haven't been in the country since I started working on the book, so I don't know what they know. I did work fairly hard not to feature particular garment workers or particular international sex workers in this book, mostly because retaliation is a concern in international contexts as well as in domestic retail environments, but the sex worker I interview about policy changes here in the US does know about the book. I think it's kind of nerve-wracking to be the subject of a book, but she seems to be holding up OK.

What did you consider your most shocking discovery whilst you were writing and researching Threadbare?
I guess how very strong and obvious the connections between the anti-trafficking NGOs and the garment trade really were. I sort of suspected there was a connection - obviously, because that's why you begin any investigation - but once I saw it, it was really very easy to unravel.

What message would you like to send to readers of Asian Books Blog about how they choose their clothes?
There’s no right answer about where to shop right now, but I do think people should be well informed. So read Threadbare, and other books about the garment industry, and think hard about what you believe in and want to support. Know that any NGO that claims to be "freeing women from sex trafficking" by offering "job training in the garment sector" or "creating fashions for retail"  is perpetuating the bad policies of the garment industry. What women need are more, and better paying, jobs: not to be stuck in the one industry they've been consigned to support by the free market. Details: Threadbare will be published in paperback and eBook on May 10, by Microcosm Publishers, priced in local currencies.
Posted by Rosie Milne at 21:00