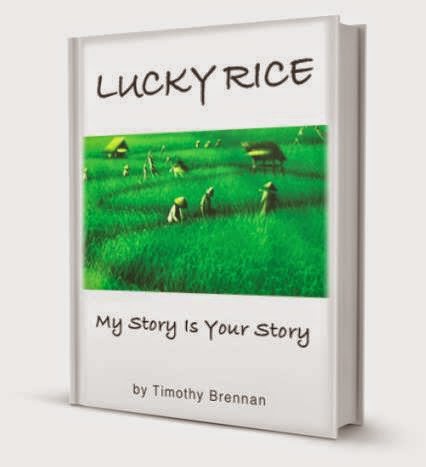 
Lucky Rice: My Story is Your Story is a fictional philosophical conversation about nature between the book’s main character Mr. Tim, and a Balinese rice farmer. The eBook is interspersed with stunning photography of rice paddies and beautiful digital sketches, hence its inclusion in the multimedia category of the eLit Awards.

Tim was inspired to write Lucky Rice to relay some of the philosophical answers he had found to life’s big questions to his five adult children. He chose fiction as his form as it enabled greater freedom of expression than non-fiction.

I asked Tim why he chose ePublishing, and how he would describe the process from start to finished product.

“I felt the traditional path to publishing is too congested, but ePublishing sidesteps this problem. Right from the start I chose to write Lucky Rice in Apple Corp's iBook Author. It's the only authoring software tool that allowed me to integrate word, audio, images, video and digital drawing. Looking ahead I see the reading experience in 2020 will be with iPads and smart phones. In the next few years special headsets such as Google Glass will heighten the reading experience. This is the marketplace I want Lucky Rice to be in.”

Tim’s editor recommended he compete in the multimedia category of the eLit Book Awards, 2014. Tim reacted to winning with modesty: “I was surprised Lucky Rice won because it's a global competition and there were so many other great books involved. Receiving professional recognition has been a great boost.”

Perhaps because of this recognition, Lucky Rice was this year accepted as the first eBook ever to be launched at the Ubud Writer's Festival.

I asked Tim how well the book went down in Ubud: “Lucky Rice was really well received. Everyone seemed to like the book and the multimedia format. For someone like me, launching my first book at the Writers Festival was a lot of fun. Being thrown into the literary world was a new experience.”

Tim jokes: “Someone along the way once told me there is only one thing more challenging than finishing your first book - wrestling a crocodile! I would agree!” However, he is already working on the sequel to Lucky Rice. This will see the main characters reconvening after twenty years.

Lucky Rice is available on Amazon and iBooks. For more information see: http://www.myluckyrice.com/

If you would like your book to be featured in Indie Spotlight, please e-mail Raelee Chapman at asainbooksblog@gmail.com.
Posted by Rosie Milne at 20:55