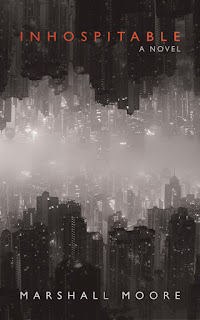 500 words from is an occasional series in which novelists talk about their new novels. Marshall Moore will soon be bringing out Inhospitable.

Marshall Moore is an American expat living and working in Hong Kong, where he founded Signal 8 Press – his own novel is to be published next week by Camphor Press.

Inhospitable is a ghost story set in Hong Kong. It explores life as an expat there, and also the idea that ghosts from the past follow you when you leave your home country. Along the way it compares Chinese and Western ideas about ghosts. As the title suggests, it comments on Hong Kong's hospitality sector, and it also takes on the city's real-estate obsession.

So, over to Marshall…

Do ghosts scare you? Long before I started writing Inhospitable, that question intrigued me. I grew up in the rural American South, where there’s no end to the ghost stories. My mother and grandmother both claimed to have seen ghosts, but they weren’t the frightening kind. Instead, they were appearances by deceased relatives who had briefly come back to the realm of the living. My grandmother’s second child, a baby boy who would have been my uncle, died in his crib. According to Granny, the night it happened, her own mother and two other female relatives, the details are gone now, appeared in her bedroom. They seemed to be crying. When Granny saw them, she knew the baby wouldn’t make it.

Most of the stories I heard were like this: benign and deliciously creepy. In the stories I read, however, the ghosts were more menacing: a decapitated railway signalman endlessly searching for his head, disruptive ghosts in hotel rooms, and so on. There’s a great line in David Mitchell’s debut novel Ghostwritten: "Unless you’ve lived with a ghost, you can’t know the truth of it. You assume that morning, noon, and night, you’re walking around obsessed, fearful, and waiting for the exorcist to call. It’s not really like that. It’s more like living with a very particular cat." When I read that, it brought the idea of how we live with ghosts into focus for me. Then I went and did a PhD in creative writing and I spent a few years researching ghosts in literature and culture. The result is Inhospitable.

The tagline on the back cover reads: "People worry too much about whether ghosts are real and not enough about what they’re going to do." In other words, I wanted to make ghosts scary, or at least more diverse. In the Western idiom, they usually manifest in limited ways: a dimly formed spectre, a cold draft, a whisper in an empty room. They aren’t beings with much agency. The Chinese ones are more frightening because they can assume solid form, making them more able to inflict serious harm on the living.

I wanted to explore the tropes of the horror genre.  I put a lot of thought into treating the ghosts as characters. Mindless evil can be frightening, but tragedy and conflicting agendas can be more so. As an aside, it was interesting to discover that publishers view ghost stories as a subset of horror, but ghost-story scholars see them as a separate thing.

Hong Kong itself is a mishmash of Chinese and Western cultural influences, which makes it a perfect setting to take these ideas for a literary spin. With a main character from North Carolina, complete with some complicated history with American ghosts, a half Chinese husband, and a sudden inheritance, I had all the ingredients I needed. Is Inhospitable scary? If you read it, which I hope you will, I’d love to hear what you think.

Details: Inhospitable is to be published on May 18 by Camphor Press, in paperback and eBook, priced in local currencies.
Posted by Rosie Milne at 17:48