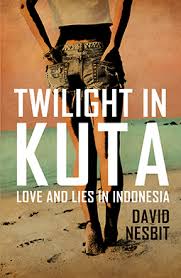 500 words from is an occasional series in which novelists talk about their new novels. David Nesbit has just published his debut novel Twilight in Kuta.

David Nesbit is a British expat living and working in Indonesia. He has previously written short stories and non-fiction pieces on the country.

Twilight in Kuta looks beneath the tourist brochures to explore love and lies in paradise. When young British tourist Neil meets Indonesian girl Yossy on Kuta beach and decides to settle permanently in Bali he knows his life is about to change forever. But will the change be for better or worse? As cracks start to appear in his relationship, he is forced to re-evaluate all he holds dear. His and Yossy’s stories intertwine with those of a mixed-race schoolgirl, a Javanese ex-soldier, and a village girl desperate for love. The various narrators offer different interpretations of the events that unfold.

So, over to David…

The story itself was borne out of two things: a sense of guilt that I had never written ‘the story inside me’, and the feeling that I did in fact have a story to tell.

The tale chronicles the life of a young and seemingly naïve British expat named Neil, who settles in Indonesia in the early 1990s. It follows his development in both his personal and his professional life. It is told in a variety of first-person voices, from the viewpoints both of Neil himself, and also those of various other characters who fall into his orbit.

As Neil gradually develops from being a young wide-eyed but basically nice chap into someone older than his years and much more cynical, the reader travels alongside him and gets to see how the seemingly small and inconsequential choices we make can have far-reaching and life-altering consequences.

I wanted to write a book based upon the defining moments we all experience in life sometimes, while at the same time trying to realise through fiction some of the people I have been fortunate enough to encounter in my time spent abroad.

Neil is like most of us at one point or another: he is complex yet he sees himself as simple. He constantly tells the reader his only aim in life is to be happy, yet due to his own inadequacies and failings this happiness always seems to be just out of reach.

Neil’s characteristics include; hopeless naïvety, selfishness, greed, and a basic lack of common sense at times. However, these traits are balanced with the capacity for hard work, adaptability, a basic decency, and the desire to do the right thing.

Twilight in Kuta looks at the lives and lifestyles of members of various social classes in Indonesia. Relating how they met Neil and the influence he has had on them, or vice-versa, each character holds court with regards to their feelings on our man. There is the young girl looking for love; the mixed-race daughter caught between two cultures; the village boy arriving in the city with dreams and determination but not much else, and the wily ex-special services operative who has a totally different plan in mind from them all.

The book has been a work in progress for a number of years. The first draft was written the best part of a decade ago and then I largely forgot it. Around two years ago I started writing again after a hiatus of a few years. I began with some short stories based on my life and experiences in Indonesia.  I looked again the Twilight manuscript and began the many rounds of revision which led, eventually, to publication.

Details: Twilight in Kuta is published in paperback and eBook by Monsoon,  priced in local currencies.
Posted by Rosie Milne at 19:18