Lion City Lit: Writing and talking about race in Singapore by Eldes Tran 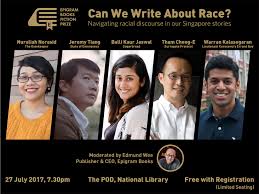 Asian Books Blog is based in Singapore, a multi-racial city. The majority population is of Chinese descent.  There are also large minorities of people of Malay or Indian descent, and of Eurasians. Our regular column Lion City Lit explores in-depth what’s going on in the City-State, lit-wise. Here Eldes Tran reports on a forum about racial discourse in Singaporean literature hosted last Thursday, July 27, at the National Library, by Epigram Books, a local independent publisher of Singaporean stories for all ages. Eldes is an assistant editor at Epigram Books.

A polite exchange of ideas turned into a bristling face-off at Epigram Books’ challenging event Can we write about race? Navigating racial discourse in our Singapore stories.

Moderated by Epigram’s publisher Edmund Wee, who is himself the author of a series of children’s books about race, the panellists were authors Balli Kuar Jaswal, Nuraliah Norasid, Jeremy Tiang, Warran Kalasegaran and Tham Cheng-E.

The debate centred on how Singapore and race are intertwined. The conversation was at times academic, at times anecdotal. It touched on the government’s categorisation of people by race and what it’s like being a minority writer.

She said her priority as a writer is to humanise the characters, and that comes with a responsibility to reveal discrimination and alienation because they are part of the story.

“Race is an identifier and part of the people’s conscious so you can’t escape it as a theme,” she said, adding that writers should not impose racial identities on characters just for the sake of it.

Still, Nuraliah was more forgiving. “Writers tend to write what they know, what they observe...so we can’t be too harsh if they use a homogenous set of characters,” she said.

Tiang, author of State of Emergency and It Never Rains on National Day, believes writers may as well take race head-on. “It’s not possible to not write about race,” said Tiang. “It’s a part of life.”

Wee appears to have come to a similar conclusion in deciding to write - with full gusto – his series Understanding Singaporeans. On Thursday, he took flak from a few audience members for the series, which covers, in separate titles, the Chinese, Malays, Indians and Eurasians. During the Q&A, one person called the books “damaging”; others could not get past the provocative titles, such as Why Do Malays Avoid Pork?

A woman in the audience then asked the “minority panellists”: “How does it feel to published by the same man who would publish those books?"

“Epigram Books is contributing to the discourse,” answered Kalasegaran, the author of Lieutenant Kurosawa’s Errand Boy, saying that all sides are needed for a conversation.

The audience was just as keen to share their experiences of racism as the authors themselves. One member recounted her story of a taxi uncle comparing monkeys with Indians. She was appalled until the taxi uncle went on to say, “I thought all Indians looked alike until I got to know them. Now they aren’t all the same.”

We need the right vocabulary to talk about race; how do we talk about race when we don’t have the language for it? She asked.
Posted by Rosie Milne at 20:03