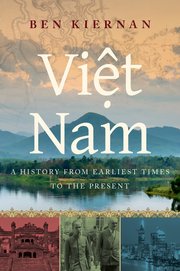 Newly-published Việt Nam: A History from Earliest Times to the Present,  by Ben Kiernan  explores the history of the different peoples who have lived in the three major regions of Viet Nam over the past 3,000 years. It brings to life their relationships with these regions' landscapes, water resources, and climatic conditions. It addresses head-on the dramatic impact of changing weather patterns from ancient to medieval and modern times. The central importance of riverine and maritime communications and systems to life in Việt Nam is a key theme.

Ben Kiernan is the A. Whitney Griswold Professor of History at Yale University. He founded the University's Cambodian Genocide Program, which later became the Genocide Studies Program, and has served as Chair of Yale’s Council on Southeast Asia Studies. He has written extensively on South East Asia, on genocide worldwide, and on genocide in Cambodia.

Here he discusses Việt Nam as an aquatic culture.

“The mountains are like the bones of the earth. Water is its blood,” wrote a Vietnamese geographer in 1820. The country’s many rivers, large deltas, and long coastline have always played a key role in its agriculture, trade, and communications. The central significance of water, not only in the economy but in Vietnamese society, culture and politics, is one of the themes of my book, Việt Nam: A History from Earliest Times to the Present.

The book demonstrates several perennial themes - ecological, linguistic, and genealogical - that permeate the millennia-long histories of the multi-ethnic lands that now comprise Việt Nam. First is the importance of the environment, landscape and climate, changing over time as heavy rains swept silt downstream and new sea levels transformed coastlines. Second is the history of languages spoken in the region. From the first millennium BCE, people in the north spoke Vietic languages, linguistic ancestors of Vietnamese. Inhabitants of the center and south spoke early forms of Cham and Khmer. And third, while many people migrated or switched languages, some of their genealogical heritage and cultural affinities persisted in family archives and ancestor cults. The identities of many Vietnamese are deeply rooted in the land where their forbears lie buried. Those moving south brought family cults from the north, while many Cham and Khmer maintained family names and some ancestral cultural practices even when they adopted Vietnamese.

Here, though, I will address the persistent significance of water in Vietnamese culture.

The first recorded name for the Vietnamese people is Lạc, a word meaning an aquatic creature, which appears in the name of the mythical Lạc Long Quân (“otter dragon lord”), who came from the sea and purportedly introduced the Vietnamese to agriculture. Some suggest that the name Lạc comes from the Vietnamese word lạch or rạch, meaning “ditch, canal, waterway,” and that farming in the Red River delta involved the draining of swampland. Huỳnh Sanh Thông (1926-2008), a leading scholar of the Vietnamese language and culture, argued that lạc is “a variant of nác, an archaic or dialectal form of nước, or ‘water,’” and that many other Vietnamese words referring to water “sound very much like lạc.”

The earliest appearance of “Lạc” comes in a Chinese statement directly linking aquatic agriculture to Lạc ethnic identity (in its Chinese form Luo) in the Red River plain, which the Chinese called Jiaozhi. A description of that region in a lost third- or fourth-century text is quoted in the sixth-century Commentary on the Waterways Classic: “[I]n Jiaozhi, there were Luo [Lạc] Fields, which appeared or disappeared in accordance with the flooding of the tide. Local people reclaimed these lands and lived on them. Therefore, people there were called Luo people.” If Huỳnh Sanh Thông’s etymology is correct, the Vietnamese were then the “water people,” those who cultivated the “water fields.”

Vietnamese came to call their homeland non nước, their “mountains and waters” – even just nước (waters). In his study, “Live by Water, Die for Water (Sống vì nước, chết vì nước),” Huỳnh Sanh Thông documented and analyzed the frequent use, from earliest times to the present, of aquatic metaphors in poetry, writing, and folklore. He wrote: “The ancestors of the Vietnamese attached far more importance to ‘water’ than to either ‘hills’ or ‘land’ in their idea of a homeland.” Aquatic metaphors recurred in nineteenth- and twentieth-century poetry. In Vietnamese literature, water could represent far more than just the idea of a homeland. “The sea and streams, ponds and lakes, water plants and beasts, barges and bridges, fisher folk and boaters, all serve as graphic metaphors to embody harsh facts or base desires as well as noble truths or deep thoughts.” Huỳnh Sanh Thông characterized the Vietnamese worldview itself as “Water, water everywhere.”

In the early fifteenth century, during the war against the Ming dynasty’s annexation of the kingdom of Đại Việt, the Vietnamese leader Lê Lợi and his scholar-counselor Nguyễn Trãi deployed guerrilla warfare. In letters to the Ming commander, Nguyễn Trãi used a Việt water metaphor to assert that “scooping up a dipper of water will not empty the sea; pouring in a dipper of water will not overflow the ocean. Therefore, [those] who [know how to] use armies well are not pleased over a minor victory nor terrified of a major defeat.” Nguyễn Trãi apparently popularized a slogan that drew upon another Việt aquatic metaphor: “Like the ocean which supports a ship but can also overturn it, so the people can support the throne or sink it.” In Nghệ An, rebels challenged the Chinese: “Overturn the boat and then you will believe that the people are like water.” Lê Lợi’s army drove out the Chinese in 1428.

In a Vietnamese-language poem in the demotic nôm script, Nguyễn Trãi wrote: “A bond attaches you to hills and streams. Make use of leisure—nourish your true self.” His phrase for “hills and streams” was non nước (mountains and waters), the Vietnamese term for one’s “country.”

The Lê dynasty lasted, at least in name, until 1788. The second ruler of the Nguyễn dynasty, Minh Mạng, an ideologically rigid Confucian, ascended the throne in 1820 feeling apprehensive - as he put it, “like sitting on a boat.” With a nod over the side at Nguyễn Trãi’s reflection, he added: “The king is the boat and the people are the water beneath. So, water can overturn the boat and the king can lose his position.”

Minh Mạng’s coronation coincided with a plague that reduced the population by 200,000. Yet one of his first acts was to ban the nôm script. Chinese became the sole language of administration. Confucian rigidity would disarm the country on the eve of Western colonial invasion.

Water metaphors remained important in Vietnamese culture and governance through the twentieth century. Today, in an era of global warming, with droughts and upstream dams restricting the flow of water in the Mekong River, while sea levels rise and conflict simmers in the South China Sea, water is still the life blood of Việt Nam.

Details: Việt Nam: A History from Earliest Times to the Present is published by Oxford University Press, in hardback and eBook, priced in local currencies.
Posted by Rosie Milne at 12:15