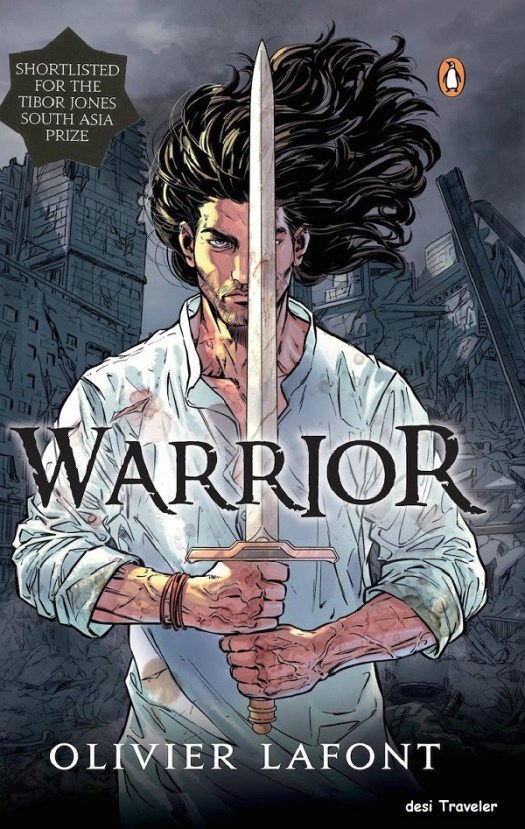 500 Words From...is a series of guest posts from authors, in which they talk about their recently published books. Here Olivier Lafont, a Frenchman whose parents moved him to India as a child, and who is well-known in his adopted home as an actor, screenwriter, and brand-ambassador, discusses his debut novel, Warrior, which was shortlisted for the Tibor Jones South Asia Prize.


This high-octane, action-packed adventure story sees the hero, Saam, Shiva's only earthly demigod child, coming out of hiding in today’s Mumbai. Saam, who has been living as a watch mender, must pick up arms and take to the road, to protect mankind against his destructive father. Over three days, Saam journeys across an India torn by unnatural cataclysms, and into other realms where the disturbances are just as great. To restore peace Saam must stoke his consuming hunger for war - but at what cost to himself?

So, over to Olivier…

“It was the summer after I graduated from university in the USA, and I had just made the rather momentous decision of not staying in America, not going to the UK or France, but moving back to India instead to live and work there. I came back home to Delhi, knowing full well that Mumbai, centre of the Indian film industry, was my eventual destination. I began to write film screenplays so I would have material in hand when I reached Mumbai, and the first incarnation of Warrior was one of those.

Back then I didn’t quite imagine that Warrior would be published as a novel by Penguin almost a dozen years later. My idea was to write an originally Indian film that would have the same epic scale and special effects as the big Hollywood summer blockbusters of the time. I was also remembering my first Indian influences, from the time when my family moved from France to Delhi when I was seven. I had read Amar Chitra Katha’s The Mahabharata comics with a great sense of wonder, since they felt so familiar to the European mythologies I had grown up with. So when I created the original story of Warrior I wanted it to also have that very intense family conflict at the centre, all set against this massive epic backdrop of a world at war.
I had always had an interest in Shiva the God of Destruction, and making Saam a son of Shiva brought a specific tension to their conflict that I found exciting. In Warrior Saam, an immortal demigod, hates his father, and has turned his back on his divine origins and powers. When the book starts Saam is settled in Mumbai today, living a peaceful, ordinary existence with the woman he loves. Cataclysmic omens begin to manifest all over India, unnatural cyclones, rains of blood, carnivorous mists, all of which point to one horrific fact: Shiva has begun his dance of destruction, and will annihilate the universe in the next three days. It falls upon Saam to take up the sword again and confront his father to stop the final catastrophe.
It took a fair amount of research to construct the story, since I liberally dipped into my various interests: history, geography, metallurgy, physics, philosophy … To me Indian thought has always been beautifully syncretic, merging disparate and even seemingly opposite fields and thoughts together. I wanted to show these harmonious dichotomies in Warrior as well, so you’ll see my version of physics and magic working together, amongst other things.

So just in terms of acquiring and assimilating knowledge, Warrior was a wonderful journey. I learned a great deal from my research, and hope that I communicated all my fascinations in a way that is enthralling for readers. Not that I’m trying to communicate any message to my readers. Far from it, my singular purpose with Warrior is to tell an exciting story, and entertain readers of all kinds.”

Warrior is published in paperback by Penguin India, priced at INR 399.  It is available elsewhere as an eBook, to buy it click here. Pricing information for the eBook should be available in your region.
Posted by Rosie Milne at 16:28