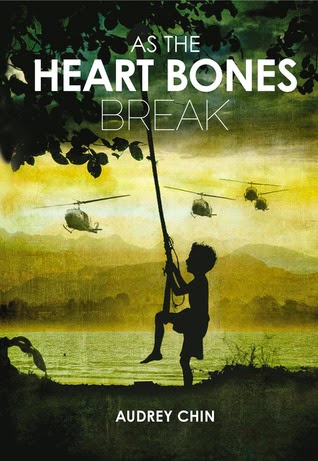 Asian Books Blog is based in Singapore.  Lion City Lit explores literary life in our own backyard.  This week Singaporean author Audrey Chin is in conversation with Raelee Chapman.

As both a child of migrant Chinese and settled Peranakan parents, and also as a daughter-in-law of the Vietnamese diaspora, Audrey sees herself as an in-between person, a traveller through different cultures. She writes what she knows, telling stories about the search for belonging, about South East Asia, about her mixed cultural inheritance, and about the Westerners who colonised her region. Her most recent novel, As the Heart Bones Break, spans 60 years, and follows an Orange County Viet-Cong spy's quest to find peace and a home for his conflicted heart. It was shortlisted for the 2014 Singapore Literature Prize for English language fiction

What was your inspiration for As The Heart Bones Break? How much research was required for the novel and how long did it take to write?

I married into the Vietnamese diaspora over 30 years ago. In part, As The Heart Bones Break was written to address the fence of silence which my Vietnamese family and friends erected around their memories; I wanted to leave my children with a story of this history. But it was also written as a response to the dearth of Vietnam War fiction from the point of view of male Vietnamese participants, especially the majority who had loyalty to neither North nor South but merely wanted the war to be over.


Are you a full time writer or do you work full time and write part time? When do you find the time to write?

I have daytime responsibilities as a financial steward. I make it a point to find some time to write every day.

Do you feel a strong literary scene exists in Singapore? Do you feel you  belong to a nation of readers?

Yes indeed, there is a strong literary scene in Singapore. I might mention my fellow contenders for the Singapore Literature Prize. O Thiam Chin has a deft hand at heartland Singapore, and Claire Tham's The Inlet says it all about Singapore's recent population balance conundrums.  Meanwhile, the winner, Amanda Lee Koe’s Ministry of Moral Panic, is a tour de force of characterisation. However, like in all countries, I would say people seriously interested in literature are a tiny proportion of the general population. I do belong to a nation of readers. But, as the statistics show, we are reading mostly non-fiction self-improvement books and fiction by best-selling foreign authors. It would be wonderful if some of us local writers were more read, both locally and globally – I am sure it will happen.

What are you currently working on?

I'm a bit hyper with my work so I have a few things on the burner. I’ve completed an anthology of short stories - 9 Cuts of the Heart – it’s sitting now with the editors at Math Paper Press. I’m deep in the middle of a noir detective story about Singapore food and a serial cannibal killer.  I’m just starting a family drama that begins with the lines:  “First Mother accepted my cup of tea then leaned over and whispered, ‘You do know don't you? Unless we exorcise 2nd mother, our husband will never love us.’ Stupid cow! As if love was part of my bargain with the old man.”

That certainly sounds intriguing!  You can read more about Audrey by clicking here.
Posted by Rosie Milne at 12:19