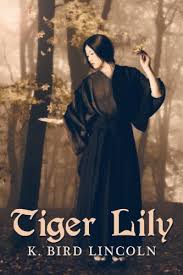 K. Bird Lincoln, an American, now lives in the Midwest, but she has previously lived in Japan.  She is the author of the medieval Japanese fantasy series, Tiger Lily, which explores the gender-bending lives of rebellious girls living during a period of Japanese history relatively little-known in the West.

Sitting in my Tokyo apartment fifteen years ago with a newborn and a two-year-old, I ended up watching a lot of variety shows on TV. Quite a range of celebrities appeared, but the most interesting commentators for me were the gender-fluid ones. Growing up in America, a country with Christian-influenced culture, the question of gender often devolved into a religious one based on various readings of the Bible. I was fascinated with celebrities like Matsuko Deluxe, a TV personality famous for cross-dressing, the all female Takarazuka Revue theater troupe, and the long tradition of men playing female roles in Noh and Kabuki theater (onnagata).  “Sin" and “religion“ historically did not frame gender concepts in Japan.

I realised gender was more of a construct of a person’s role in society than the physical attributes of their body. I began digging around in my leftover Japanese History books from college and unearthed tales of women warriors (onna bugeisha) from Japan’s long history. Women who, like Joan of Arc, lead men into battle as women, or women like Deborah Sampson, from the U.S. Revolutionary War, who disguised themselves as men in order to go to war.

One of the most famous onna bugeisha from Japanese history is Tomoe Gozen (Lady Tomoe) who fought for the Minamoto, a clan formed by members of the imperial family who were excluded from the line of succession. She fought during the Genpei War (1180 - 1185) when the Minamoto and a rival clan, the Taira, duked it out for control of Japan. But it’s her lesser known compatriot, Hangaku Gozen (Lady Hangaku) who stole my heart. Tomoe Gozen died as a result of battle. Hangaku Gozen supposedly lead 3,000 men in defense of her Tossaka Castle, against a force of 10,000. Here is a gifted warrior, educated, from an upper class family, trusted with overseeing a castle, fighting off invaders with bow and arrow, and possibly naginata, a traditional Japanese bladed pole weapon. From Curtis A’s translation of Azumi Kagami, a Japanese historical text: “Standing at the top of the watch tower with her hair tied up like a child, and wearing an armored haramaki, all that were shot by her arrows did not survive. Many of Sazaki Moritsune’s troops were slain in the hands of this woman.”

Hangaku Gozen was hard core awesome in a traditionally male role. But that’s not all. Hangaku Gozen lost the battle, survived being brought before the enemy Shogun, is married off to a different samurai warrior, and goes on to live a long life. Now that to me, was another dimension of awesome. It is difficult to tell from historical documents what Hangaku Gozen’s life was after marriage. It seems she traveled with her samurai husband to various places, and that he chose her for her fierceness in order to breed fierce children, it isn’t too big a stretch to imagine she inhabited the traditionally female roles of mother and wife as well as she did warrior.  A formidable person, indeed.

When most U.S. folks think of Japanese history and samurai, they’re thinking of the Edo Period (around 1600 to 1868), when the Shogun ruled from Edo (Tokyo). But the period of history I liked the most in my college Japanese history classes was the Ashikaga period (1336-1573) leading up to the Edo Period, when Ashikaga Takauji, de facto leader of the Minamoto clan during the Genpei War, basically rebelled against the current Shogun of the time in Kamakura and fought to restore the Imperial Throne to its former prominence. This resulted, after a while, in a Northern and Southern Emperor dividing Japan.

I took this period, twisted the religious history of coexistence between native Japanese Shinto religion and the imported Buddhism into one of persecution of the indigenous, shamanistic ways, and stuck a peasant girl and the younger scion of a samurai family into the struggle between the rival Emperors' courts.

In the first book of my series, Tiger Lily, Lily lives a life on the outskirts of her little village. Born in the masculine and fiery year of the tiger, she will be no fit mate for any village boy. With a missing mother, she takes on the tasks of both of caring for her younger siblings and hunting for their food. Her role encompasses both the masculine and the feminine. And, with the risk of spoiling the story, so does her main foil, as they both strive to protect their families, make some kind of future, and learn how to love someone of a different class.

Tiger Lily isn’t exactly an onnagatta, since she isn’t an actress, but she does inhabit the more traditionally masculine role of hunter, and the villagers certainly treat her as if her tiger nature defines her, in the same way the audiences treated the men inhabiting the roles of female parts in Kabuki and Noh as if those female roles defined them.

The most interesting people for me are interstitial - those at the crossroads of gender or culture or race. Not only do gender-fluid people make us painfully aware of our assumptions about gender and the binary roles traditionally present in history, they also provide a rich and exciting reservoir from which to draw tales that illuminate our present.

Details: Tiger Lily and the sequel, The Straw Doll Cries at Midnight, are available from Amazon.

Alexa Kang is the author of the Shanghai Story trilogy.
Posted by Rosie Milne at 14:59