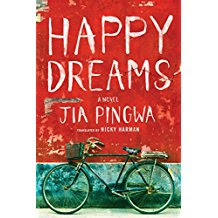 Although few of his novels are currently translated into English, Jia Pingwa is one of China’s most popular novelists. UK-based Nicky Harman translates from Chinese into English, and spends time promoting contemporary Chinese fiction to the general English-language reader.

Happy Dreams concerns Hawa 'Happy' Liu’s search for a life that lives up to his self-given name. He travels from his rural home to the city of Xi’an, taking with him only an eternally positive attitude, his devoted best friend Wufu, and a pair of high-heeled women’s shoes he hopes to slip onto the feet of the yet to be found love of his life.

In Xi’an, Happy and Wufu find jobs as trash pickers sorting through the city's dumps. But Happy refuses to be crushed by circumstance: in his eyes, life is what you make of it. His optimism seems justified when he meets a beautiful girl: surely she is the one to fill the shoes? But when harsh conditions and the crush of societal inequalities take the life of his friend, Happy needs more than just optimism to hold on to the belief that something better is possible.

Jia Pingwa’s, 高兴, Happy (Happy Dreams in translation) was published in 2007 and I came across it the following year. I felt an immediate empathy with this handful of migrant workers collecting the trash of a sprawling Chinese metropolis, Xi’an. I made some efforts to find a Western publisher, including phoning Mr Jia out of the blue to ask about rights (he was a bit surprised, I think) and getting a sample published in the Guardian newspaper in 2008, but it was not until 2015 that Amazon Crossing spotted the sample, and approached me to translate the novel. Good things come to those who wait, as the Guinness adverts famously used to say.

Unlike the sprawling rural epics for which Jia Pingwa is known, Happy Dreams contains only a handful of characters, principally Happy Liu and his friend Wufu. The pair arrive in Xi’an from their village, rent room in a semi-derelict building and settle into life as trash collectors. We follow them through a series of tragi-comic adventures and then Happy falls in love, and things get more serious. (Do not be taken in by the Chinese film of the same name which, although it has Jia Pingwa’s name on it, is a slapstick comedy.) In due course, a series of disasters strike: his lover, a prostitute in one of Xi’an’s ‘hair and beauty salons’, is arrested by the Vice Squad and sent to be ‘reformed’; Wufu dies of a stroke; and (this is how the novel opens), Happy is arrested trying to take his friend’s corpse home by train.

As I launched into the translation, I discovered a whole series of challenges that I had somehow failed to anticipate. First and foremost, I had to understand the dialect, I mean really understand it, not just well enough to read and enjoy the novel. Then there is the form the novel takes: almost entirely interior monologue or dialogue. Chit-chat is by its nature allusive, even elliptical, and the Xi’an dialect also conspired to make it hard to understand what was going on. Jia Pingwa is particularly inventive with expressions and images which may be quite local or just his own. Here’s Wufu insisting he’s going to get drunk today, because, ‘… After all, tomorrow my gob might be sewn shut!’ (And that’s my gloss on a much more obscure expression: ‘哪怕明日嘴吊起来哩!’, ‘Tomorrow I may be strung up by my mouth [like a fish on a hook], …’)

The larger challenge was, I felt, finding a voice for Happy Liu. He has to ‘speak’ to the reader, and convincingly. Could I use an equivalent dialect? Well, no, and not just because I don’t have one at my disposal, but because if I made Happy sound like a Glaswegian bin lorry/trash truck operator, that would be stretching the reader’s credulity too far. He had to sound like a working-class Chinese, just speaking in standard English. With an American publisher, Happy couldn’t sound too British either, and the editor weeded out a number of ‘Britishisms’ and helped me find some substitutes. (American slang is not, after all, my native language.) Luckily, she was both sensitive and sympathetic, and the editing process was rewarding, if at times a little hair-raising as I tested every edit against that inner voice I had invented. I remember one discussion we had. Happy says: 我们…快快活活每人多赚了五百元钱. My version went: ‘We’d been really chuffed to earn an extra five hundred yuan each,…’ Chuffed represents the adjective 快活 kuai huo, happy or cheerful. Jia repeats the characters, 快快活活, kuai kuai huo huo, giving the adjective an intimate ring, rather like the way Latin American Spanish adds a diminutive to an adjective, making despacio (slow) into despacito. But chuffed, which also has an intimate feel, was too British and had to go. In the end we agreed on: ‘We’d been pleased as punch to earn an extra five hundred yuan each….’

I don’t want to make the translation process sound too laborious. Happy Dreams is full of local colour and I had fun with my research into the places and things described, assembling a fine collection of pictures of 饼 (bing) and 馍 (mo), Xi’an street food, (Happy and his friends were always half-starved.) 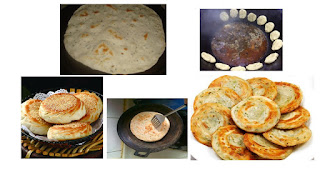 And when, in a few cases, I drew a blank, Jia Pingwa came to my aid with hand-drawn sketches, like this one of a hexagonal hotel building placed in relation to the roadway to maximize its good fengshui: 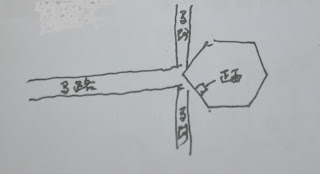 In Happy Dreams Jia Pingwa tells a good story and takes us to strange and fascinating places. But what really makes the novel, in my opinion, is its main character, Happy Liu, who is particularly finely-drawn. The man is a bundle of contradictions, a kind of Xi’an Charlie Chaplin: pretentious, engaging, obnoxious, honest, devious, foul-mouthed and tender (to his best friend and to his lover), and ever-ready with his aphorisms and homilies. Happy is an unlikely hero, but a winning one.