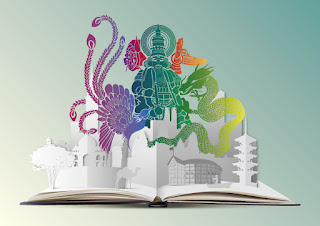 Asia House, in London, is a non-profit, non-political organisation that promotes the exchange of ideas between the diverse communities of Europe and Asia. Each May it hosts The Asia House Bagri Foundation Literature Festival which features some of the best in literature with specifically Asian interest. For the first time this year Jemimah Steinfeld was Festival Manager – she is also the author of Little Emperors and Material Girls: Sex and Youth in Modern China.  I asked her to reflect on this year’s recently-concluded Festival.

How did the Festival go overall?
It was a big success. Numbers increased compared to last year and feedback has been very positive. There were no hiccoughs, so that was good.

Each year the Festival is themed. This year’s themes were youth and gender, with an emphasis within the gender strand on female suffrage. How did you select these themes?
This year we decided to make our themes more focussed than in the past - last year the theme was values, which is more open to interpretation. For this year we wanted to reach new audiences and to do so by engaging with the topics that they care about.

For you, what was the highlight from events falling under the theme youth?
Our opening night was on China’s one child generations to mark the launch of Xinran’s new book, Buy Me The Sky, which explores exactly that. It was very well attended and she is a fascinating figure in the contemporary Chinese literary world.

For you, what was the highlight from events falling under the theme gender ?
A talk about Sophia Duleep Singh, an early 20th century Indian princess turned suffragette, was definitely one highlight. While it was focussed on the past, it had a very contemporary feel. The speaker, BBC journalist Anita Anand, wrote Sophia: Princess, Suffragette, Revolutionary; she had an excellent command of the subject, and of the stage. The event was timed to be a week ahead of the UK General Election, and it attracted a very lively, engaged audience, with a lot of top journalists in attendance too.

Do you cover genre fiction? If so, can you give details?
If there is a trend, whether it’s in literature or in Asia on the whole, we try to cover it. At the moment there is a lot of crime writing coming out of China, so that was relevant, and we held some events around it. We would definitely consider other genre fiction in the future.

Do you work with many authors published by small local publishers within Asia, or mainly with authors publishing with the big international houses?
We love working with authors based in Asia whether they are from big publishing houses or small ones. The main issue is budgeting. It’s expensive bringing them across the world, which is an issue both big and small publishing houses can suffer from. We would like to develop further links with publishers across Asia, but obviously we have to ensure it’s feasible.

Amitav Ghosh launched Flood of Fire,  the final part of his Ibis trilogy, with you just after it was announced he’d lost out on the International Man Booker 2015, for which he was nominated, and which was won by László Krasznahorkai. Could you give a brief account of the launch, and say how Amitav Ghosh was received?
It was a great night! While Amitav did not win the International Man Booker, he is such an impressive figure with a cult following, so it didn’t matter. He spoke about his life and his work. He had a wonderful stage manner, was very warm and personable and had a good sense of humour too.

Are all your events in English, or are some in Asian languages?  Must all works under discussion be available in English?
We have speakers who are not competent in English and for them we get translators. It’s great to hear different languages as part of the Festival. However, we do stipulate that featured works must be available in English as ultimately, being based in London, our audience is predominantly English-speaking and so untranslated work is less accessible in general, plus the sale and signing of books is a big part of an event.

Is it part of your remit to connect with readers in Asia, or are you more concerned with getting people in the UK interested in literature with Asian content?  If you want to engage people in Asia, how do you plan to do so?  Do you think there may one day be an outreach programme on the continent?
We want to engage people all across the world. Of course the UK is our primary target – we mainly run events and to keep them sustainable we need big audiences, so we have to engage with the UK first and foremost. In addition, people in the UK might not know as much about Asia as people in Asia, so again it’s important for us to be that platform here – we are the UK's leading experts on Asia. That said, we would like to connect with people in Asia more too and we would consider projects on the continent if they seem feasible and worthwhile.

What are the ambitions for the Festival, over the next 5 – 10 years?
We want the top writers from or on Asia to see Asia House Bagri Foundation Literature Festival as the best platform for their work in the UK and we want to attract bigger audiences, who have a great time at the Festival.
Posted by Rosie Milne at 12:38