I wondered what she thought UWRF had achieved for Indonesian writers? “The Festival has played a major role in the birth of a new generation of promising Indonesian authors. Ours is the only literary festival dedicating significant resources to ensuring that emerging Indonesian writers, those producing quality work, but having limited or zero exposure at the national level, receive fair attention. Selected writers receive sponsorship to attend the Festival and the works they present are translated and published in our annual bilingual anthology, making their works accessible to English speakers. Since 2008 we have showcased 75 emerging Indonesian writers.  This year more than 600 young writers from across the archipelago submitted applications to attend. The chance to speak alongside established authors, from Indonesia and elsewhere, provides chosen writers with valuable networking opportunities.  Separately, we have established links with literary communities right across the archipelago; the Festival is now the primary bridge connecting Indonesian authors, particularly those living outside Java, with the international literary community."

Moving from emerging writers, to more established ones, UWRF hosts many book launches.  Of the books by Indonesian authors being launched this year which was Wayan most looking forward to reading, and why? “Renditions of My Soul, by Balinese author Desak Yoni. I met her a couple months ago and she struck me as a different kind of Balinese women: outspoken and passionately opinionated. She told me that her book touched controversial issues and might get her into trouble with mainstream Balinese thinkers.” 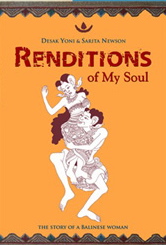 Renditions of My Soul, published by Saritasku Editions, certainly does sound interesting. Returning to Bali after years abroad, Desak Yoni experienced at first hand the multiple challenges facing Balinese women struggling in a patriarchal world. Renditions of My Soul, a fictionalized memoir that morphed into a novel, is apparently an antidote to consumer driven fantasies of Bali as a hedonist’s paradise, and as such it ought to be well worth reading.

UWRF has few events in Bahasa.  I put it to Wayan that this was perhaps a little odd, but she disagreed: “We are essentially an international festival with English as the main language. We provide interpreters for Indonesian authors who need them, but rather than holding a majority of events in Bahasa we opted for a different approach: inviting as many Indonesian writers as possible, translating and publishing the works of selected Indonesian emerging writers, and ensuring that all our invited Indonesian writers get exposure through panel appearances and media interviews. At the moment, our audience composition is about 70% foreigners and 30% locals. The foreigners have varying degrees of fluency in Bahasa, and many of them hail from English-speaking countries.  Meanwhile, most members of our Indonesian audience are fluent in English. Given these facts it would be counter-productive for us to use Bahasa as the main language of the Festival.”

What did Wayan hope the 30% of local readers attending the Festival would take away from it? “UWRF is about exchanging ideas. Indonesia is a young democracy  - a nation in transition - which has to deal with huge new issues: gay rights; multiculturalism; terrorism; free markets; women’s rights; environmental conservation. The Festival sees a multitude of writers from various countries, diverse political ideologies, and different belief systems, gathering at one place discussing these critical issues. I believe that exposure to such diverse viewpoints and experiences must benefit Indonesian readers by expanding their horizons of thought and, by offering insights on how they might speed up the transition process and steer the country onto a correct course.”

This year, in conjunction with The Asia-Europe Foundation, UWRF ran Long Way Home, a short story contest. Leroy Luar, from Malaysia, won the Asian section, with The Evidence of Us. Special mention went to Maltese-French author Nadia Mifsud for Made in Bangladesh, and to Kathrina Haji Mohd Daud, from Brunei, for I am a Bird.  You can read all three of these stories, and others, by following links either on www.ubudwritersfestival.com, or on the website for The Asia-Europe Foundation www.asef.org
Posted by Rosie Milne at 08:32