If you’re fed up with books about lucky westerners going through a patch of angst, then read The Rainbow Troops by Andrea Hirata, which was originally published in Indonesian.  It is now available in English translated by Angie Kilbane; I read the Australian edition from Random House.

The Rainbow Troops are a group of dirt-poor students from the ramshackle Muhammadiyah Elementary School on the Indonesian Island of Belitong. Have you heard of Muhammadiyah?  I hadn’t, until I read The Rainbow Troops, but I now know it’s a charity that helps Muslims via education – the novel employs all sorts of Malay and Muslim words and concepts previously unknown to me.

The Rainbow Troops get their name from sitting in a tree in their schoolyard looking for rainbows.  In Indonesian they are called Laskar Pelangi. Either the author, or the translator, explains that pelangi means rainbow, and laskar means warriors, but I suppose the novel couldn’t be called, in English, The Rainbow Warriors, because of associations with Greenpeace?

Mind you, The Rainbow Troops fight hard for their environment, and this novel might prod you to do a light spot of internet research on tin mining in Indonesia. Tin mining is the backbone of the Belitong economy, and one of myriad threats to the existence of The Muhammadiyah School comes from a rapacious mining company which wants to knock it down to dredge the land it stands on. The Rainbow Troops see off this threat, as they see off many others.

This is not, however, a feel good novel with happy endings all round. The narrator, Ikal, is a clever boy, but not the cleverest in his class; he perpetually comes second to Lintang, a genius who is so desperate for an education that he daily crosses crocodile infested swamps to get to school.  Lintang’s fate will make your blood boil, as will this whole novel, it is a book furious at the injustice of the world, but it wears its anger lightly, and it charms, rather than lectures – it deceives you into thinking. 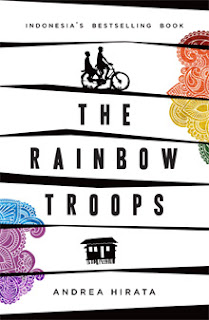 There is only one girl in Ikal’s year, a gender imbalance he appears not to notice, although I’m sure all western readers will ponder it.  The novel does, however, have a courageous, inspiring female character, Bu Mus, one of the two extraordinary teachers who provide The Rainbow Troops with hope for the future. Bu Mus is only fifteen when she starts teaching, she is not qualified in any way that would be recognised in the West, she receives no pay for her work – and she is a heroine adamant the children in her care will be freed by education from the illiteracy and drudgery which blight their parents’ lives.

I urge you to read The Rainbow Troops.  Unless you share Ikal’s background, it will force you to think about lives very different from your own, and unless you are impoverished by Asian standards, it will force you to consider how privileged you are.  But this is not a self-consciously worthy or earnest book, it is instead gentle: warm, tender, and heartbreaking.
Posted by Rosie Milne at 16:34