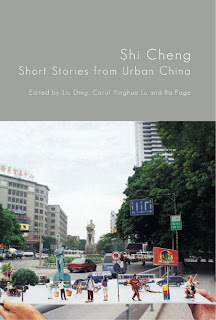 Shi Cheng, Short Stories from Urban China, edited by Liu Ding, Carol Yinghua Lu & Ra Page, published by Comma Press in both paperback and e-book format, is a sort of mind map of both modern China, and also of what it’s like to be human. Shi cheng means ten cities, and the collection contains ten short stories, each set in a different Chinese city, each by a different contemporary Chinese author, and each translated into English by one of a small team of translators.

A sense of place is never absent. The ten cities are rendered in all their specificity, from the weather, to the food consumed, to the traffic patterns, to the toilet arrangements, but Shi Cheng is not a geography textbook, and the characters take precedence over the settings.

Many of the stories are funny. Squatting, written by Diao Dou, and translated by Brendan O’Kane, uses comedy to mock both municipal bureaucracy, and also ill-judged interventions in municipal affairs by well-meaning (self-styled?) intellectuals. When discussing crime rates on summer nights, the author writes:  “In principle, I believe, the overall mainstream big picture situation of our city at the macro level is hardly different from Paris or Warsaw, Pyongyang or London, Tokyo or Beijing, Baghdad or Port-au-Prince, Canberra or Kabul, Sarajevo or Caracas, Addis Ababa or Buenos Aires.”

As for crime rates, so for emotions: people from Pyongyang fall in and out of love as surely as Parisians; jealousy provokes shameful behaviour in Warsaw just as in Beijing; rejection hurts whether you’re living in Tokyo, or in Caracas.

Shi Cheng highlights these similarities between people, rather than their differences. Granted, the settings are all in China, and most of the details are specifically Chinese, nevertheless the struggles of the various characters are universal.

In Kangkang’s Gonna Kill That Fucker Zhao Yilu, by Jie Chen, translated by Josh Stenberg, love, jealousy and the complexities of friendship are much more important than the setting, Chengdu.

Family Secrets, by Ding Liying, translated by Nicky Harmen, is also about jealousy - and also about anger and disillusionment.  The narrator is a newspaper columnist who gets more than she bargained for when she answers the phone to one of her readers; with a few minor adaptations it could be set anywhere where newspapers publish gossipy human-interest stories, and journalists feel ashamed of their work.

If you want conversations one-to-one with various Chinese writers, and the various characters they have created, then I recommend Shi Cheng. If you have read it yourself, then do please post with your comments.